With the British Lions presently touring New Zealand, it was great to hear the thoughts of a player who wore the Lions red jersey in 8 tests on the 1974 and 1977 tours scoring 44 points.  He was also captain of the 1977 tour to New Zealand, which they lost 3-1.

Phil Bennett was a key member of the undefeated 1974 British Lions who toured South Africa.  However, his style of running the ball from any part of the pitch was not to the liking of tour captain, Willie John McBride, who told him to ‘not try any of that Barbarians funny stuff here’.  McBride was referring to the Barbarians vs All Blacks test match in 1973 when Bennett double-side stepped inside his own 22 and starting the move that produced, what many believe, was the greatest try ever scored.

Even though rugby has changed with the advent of professionalism, Phil explained that the ability to succeed as a British Lions squad is down to the bonding of the team as much as the capabilities of individual players. 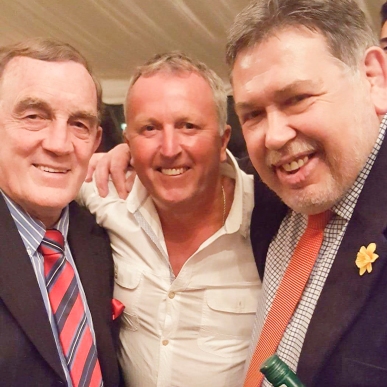 It was fascinating to listen to Phil’s stories from a classic rugby era, but also to hear his opinions on the modern day game.  Phil often appears as a rugby pundit on television, radio and in the printed press, and his depth of knowledge and love of the oval-balled game was clear for all to see.  It was a great night for any lover of rugby

Caldicot RFC is based near Chepstow in Monmouthshire and was founded in 1961.  In the 2016-17 season, Caldicot RFC finished tenth in the WRU National League Division 2 East with 36 points.